Wendy Clarke started her career writing short fiction and serials for national women’s magazines. With over three hundred stories published, she’s often asked to judge short story competitions. Wendy has had three psychological thrillers published by Bookouture – What She Saw, which won the Flash500 Novel Competition, We Were Sisters and The Bride which was published on May 20th. Wendy lives with her husband and step-dog in Sussex and when not writing is usually dancing, singing or watching any programme that involves food!

Could you tell us briefly what your third psychological thriller, The Bride, is about?

Wendy Clarke: Alice has lost her mum, her job and her fiancé so when she has the chance to reconnect with her childhood best friend, Joanna, she doesn’t hesitate. Joanna invites her to her upmarket apartment in London’s Black Water Dock to meet Mark, the fiancé she’s only known a few weeks, but when Alice arrives, instead of the smart new development she’d been expecting, New Tobacco Wharf stands in an area of dereliction. That’s not all. Instead of Joanna, it’s Mark who greets her and he has some unsettling news. Joanna is missing.

Does one of your characters hold a special place in your heart? If so, why?

WC: I think it has to be Alice. There are some people who always seem to attract bad things in their life and Alice is one of them. Events in her childhood have left her vulnerable and needy which is why she makes a complex protagonist. On the one hand your willing her to achieve her quest in finding what has happened to her friend, but on the other, you want to shout at her just to leave New Tobacco Warf and go back home where she’ll be safe. Alice might not act as we would in the same situation but the personality traits that keep her from leaving the apartment block are also the ones that help her to eventually work out what happened to Joanna. She was fun to write.

While writing your book, what was the most surprising thing you discovered or learned?

WC: I think the most surprising thing I’ve found when writing all of my psychological thrillers is that the best twists only emerge once I start writing. They can’t be planned in advance. The final twist in the epilogue of The Bride came as a eureka moment when I was writing the chapter before. It was not the ending I’d originally planned but I loved it and, thankfully, most of my readers do too.

When plotting a crime, where do you get your inspiration?

WC: It sometimes starts with a nugget of an idea, something I’ve read or heard, but more often than not it will be a setting that inspires me. For The Bride, the inspiration was a black and white photograph of an old dockland warehouse which I’d seen in a coffee shop. As soon as I saw the building, I knew I had to set my next psychological thriller there. Once I’d decided on the general theme of the novel, I moved on to asking ‘what if’ questions. For The Bride it was: What if someone was trapped in a building like this one? What if someone who lived there had gone missing? What if someone had an ulterior motive for being there? As I asked the questions, the answers helped to form my story.

When it comes to plotting your novels, do you have the whole book outlined before you write? Do you use any specific strategies or techniques?

WC: The odd thing is, I never used to plan at all. In fact, my first novel was written with just the beginning, middle and end in my head. Things changed when I was offered a contract by my publisher and was asked to pitch an idea for a second book in a synopsis. It was the first time I’d tried planning a whole book before writing it but it’s amazing what you can do with a two-book deal carrot dangling in front of you! When I was offered a second contract the following year, I found the process much easier and having a synopsis to work from actually made the writing part easier. That story outline is where my planning ends though. I don’t plot individual chapters or have sticky notes stuck on the wall marking the story arc… I just write and the story develops further as I go. I keep reasonably faithful to my plan but often the story takes me on a slightly different trajectory. It’s when a new character pops into my story that I think, where did you come from?

It’s always interesting, to find out what a writer loves to read. Could you share with us three of your favourite books and why they had you hooked?

WC: I loved Room by Emma Donoghue. It was the novel I wished I’d written and, despite being claustrophobic, I have a fascination for stories that are confined to four walls. My second choice is Restoration by Rose Tremain because of its humour and the beautifully drawn characters that make you feel as if they’re in the same room as you. Finally, I choose The Silent Patient by Alex Michaelides because it was one of the few thrillers that has kept me guessing all the way through.

WC: Write often until you find your own voice. Love what you write and get back into the saddle straight away if you have a knock back. Writing is a hard but wonderful business.

Here’s a sneak peek at The Bride…

Fingers are on my heavy eyelids, first one then the other, prising them gently open. A circle of light. Too bright and then merciful darkness again. When my hand is lifted, it’s like it’s made of lead. Can they feel it too? There’s a pressure on my finger as something is clipped to it. The rasp of Velcro then tightness around my arm.

I try to remember what happened. Why I’m here. But there’s nothing.

Through the fogginess of my brain and the pain in my head, I hear voices. A man. A woman. Words moving in and around one another, some coming to the fore before drifting away again: concussion, vital signs, lucky.

The covers of my bed are too heavy and I try to push them down, but the sharp pain in the back of my hand stops me. When I force my swollen eyes to open a slit, I see that taped to the skin is a thin tube attached to an IV bag of clear fluid on a metal stand.

Then more sounds. The clink of the side rails being raised on my bed. The metallic slide of a curtain. A small jolt as my bed begins to move. Sliding doors. More voices. A cool hand on my forehead. 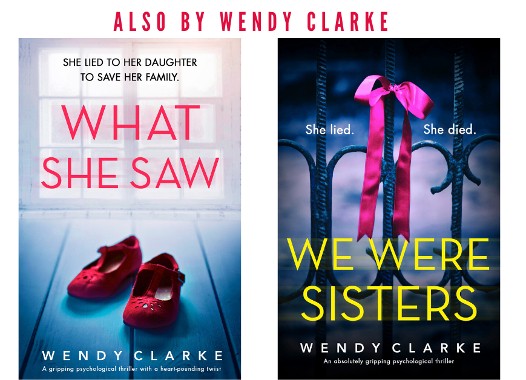 You can buy Wendy’s novels on Amazon.