Peggy Jaeger writes contemporary romances and rom coms about strong women, the families who support them, and the men who can’t live without them.

Family and food play huge roles in Peggy’s stories because she believes there is nothing that holds a family structure together like sharing a meal…or two…or ten. Dotted with humor and characters that are as real as they are loving, Peggy brings all aspects of life into her stories: life, death, sibling rivalry, illness, and the desire for everyone to find their own happily ever after. Growing up the only child of divorced parents she longed for sisters, brothers and a family that vowed to stick together no matter what came their way. Through her books, she has created the families she wanted as that lonely child.

As a lifelong diarist, she caught the blogging bug early on, and you can visit her at peggyjaeger.com where she blogs daily about life, writing, and stuff that makes her go “What??!”

Could you tell us briefly what your upcoming release, Baked with Love is about?

Peggy Jaeger: Baked With Love is the third book in the MATCH MADE IN HEAVEN series, about a trio of sisters who live in the fictional town of Heaven, NH. They, collectively, help run a cottage wedding business. This is the story of the youngest sister, Maureen, who owns Inn Heaven, a charming B&B.

Innkeeper Maureen O’Dowd lives to cook and bake, spoils her family and friends, and is an expert at keeping secrets, especially about the man who’s held her heart for years. Police Chief Lucas Alexander is dealing with an aging father and a moody teenage son, and he’s in love with a woman who only wants to be friends. How can these two fiercely private people reveal their feelings for one another without destroying the friendship they already have? And if they’re successful, will another secret, if revealed, drive a wedge between Maureen and Lucas that can never be repaired.

When writing a series how do you keep things fresh, for both your readers and yourself?

PJ: That’s a great question. I tend to hold back little nuggets of personality quirks, or things that motivate a character if they are, say in book one as a supporting character, but will be the star of book 2 or 3. That way, even though the reader thinks they know the character, they really don’t know everything. Characters who don’t grow from book to book are just flat and non-realistic. Doling out info about the characters, or showing how they deal with a situation helps keep them fresh and not stale in the reader’s eyes. And in my own.

You also write romantic suspense. A Pride of Brothers: Rick book 1 was published by The Wild Rose Press on January 13th, 2020. Could you tell us a bit about Rick? What makes him a strong hero?

I never intended to tell his story at all, but was persuaded by a few readers to do so. He made an appearance in my WILL COOK FOR LOVE series, in book 2 A Shot At Love, and he made such an impact on the readers, they wanted him to find his own HEA. I agreed and gave it to him in the form of lawyer Abby Laine. Rick is former military/special forces and has a dark family past. So dark, he vows never to commit to any woman or have kids because he doesn’t want to pass any bad genes on to anyone else. He’s a strong hero because even though he fears, and runs, from commitment, he is, by nature, a protector of all in his realm. He will protect— to the death — someone he cares for.

This was my original blurb for the book, which tells it all:

Rick Bannerman’s job is to protect. An elite bodyguard and P.I., he’s used to denying his emotions and ignoring his feelings in order to keep those in his care safe, at all costs. When lawyer Abigail Laine becomes the target of a vengeful client, Rick slips into protection mode even though Abby refuses his help. Four years ago Rick left Abby standing on a balcony alone, after walking away from a kiss that sent them both reeling. His refusal stung, and Abby’s sworn to forget it so she can shield her heart and move on with her life. But now she needs Rick’s professional help and her reluctance to accept it could just cost her her life. Can these two stubborn and independent people put their troubled pasts behind them and learn to trust one another?

What strategies do you use to create suspense?

PJ: Another fabulous question. I tend to think the stuff I write is romantic suspense lite. There’s usually someone (our heroine) who is in danger of some kind and the hero is around to protect her. The funny thing is, in most of my romsusp work, the heroine saves the day in the end, most of the time saving the hero as well. But I digress from your question.

Foreshadowing is a great tool to ramp up suspense ( and terror). Knowing something is coming down the pike, but not knowing what it is, makes my spine tingle a little and makes me want to read on. I always like to have a question in my books that needs answering, such as, why is this person stalking our heroine, or who killed the sister of a computer giant? The whodunit method always works well, because we all, as readers and people, want to know the answer.

Another thing I learned very early on in my writing was not to shove every bit of info you have down the reader’s throats in the first chapter. So may new writers do this info dump and it’s not only distracting from the story, it’s…boring to read. Doling out little pieces of info along the way helps keep the momentum and the suspense up.

Does one of your characters hold a special place in your heart? If so, why?

PJ: That’s like asking if you like/love one of your children more than the other, hee hee. I have to be honest and say, no. I love them all equally, they each frustrate me to no end, and I’d take a proverbial bullet for any of them if I had to.

PJ: Don’t listen to naysayers who tell you the market is saturated and glutted, or that your work will never be seen by readers. Yes, self publishing has made the book writing market crowded and the publishing houses have dwindled in the amount of new writers they take on. This is, after all, a business and people need to get paid. Taking a chance on a new, untried and testsed writer is difficult now for publishing houses. But if you have talent, something to say, and a quirky story to tell, you will find your readers. Never give up on your dream. In the words of Rocky Balboa, “Go for it.” 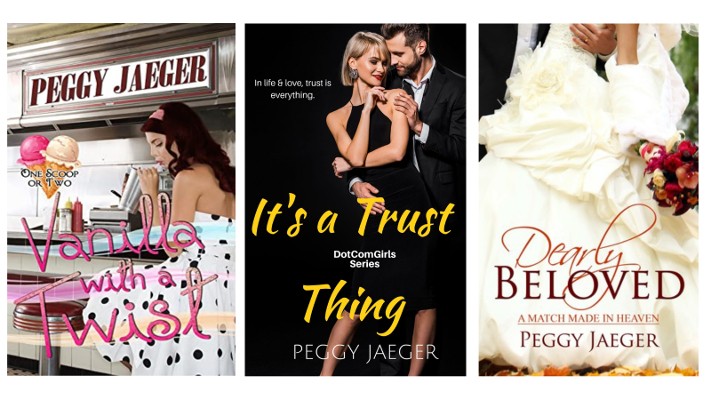 Watch for the cover reveal of Peggy Jaeger’s Baked With Love on November 11th, 2020!