A warning before we begin: this won’t be an impartial interview, as I must confess that I myself am an avid reader of the “Thursday Next”, “Nursery Crime Division” and “Shades of Grey” series. I’m thrilled about the upcoming release of your latest novel, Early Riser.

Based upon the jacket blurb on your website, Early Riser seems to be another dystopian novel, like Shades of Grey was. Could you tell us briefly what Early Riser is about?

Jasper Fforde: Early Riser is a thriller set in a world in which humans have always hibernated. The important word in that sentence is ‘always’ as humans are now quite subtly different socially, economically, and physiologically. It is these difference that are the driving forces in the narrative, and like all speculative fiction, allows me to experiment with different ground rules for new and (hopefully) exciting possibilities in story telling. Our hero is Charlie Worthing, who finds themselves working as a ‘Winter Consul’, one of a group of law-makers who patrol the sleeping masses, making sure that mischief is kept to a minimum, and nothing disturbs the ‘Sanctity of the sleepstate’. It is a voyage of discovery into the night, if you like, perhaps akin to getting up at two in the morning for the first time, and finding that not everyone is asleep, and the ground rules are subtly different. It’s cold, it’s dark, it’s odd - and the Summer seems very far away indeed.

Living in Canada, I see the appeal of hibernating through the bitterly cold months. How did you come up with the idea of writing a book based upon the concept of human hibernation?

JF: It was one of several ideas that coalesced in my mind as I was looking for a book to write that wasn’t a series book, and would allow me to explore a potentially rich thread of narrative experimentation. I tend to write with the notion of a ‘narrative dare’ and to see what appears out of the murk once I have changed the bedrock ground rules of society. Whether it be the fact that you could travel into books, or investigate Nursery Rhymes, or even base a society on visual colour - the narrative offshoots always throws up something interesting, and while Early Riser has much that is familiar, a lot of it will also be, I hope, pleasingly off-kilter.

You have a knack for creating unique mysteries for your protagonists to unravel and even more unique crime scenes. Thursday Next is a literary detective, who travels inside the pages of a book to solve crimes. In the “Nursery Crime Division” series, the police solve crimes related to nursery rhymes. The protagonist of Early Riser, Charles Worthing, is investigating an outbreak of viral dreams, in which the dreams start killing people and come true. I have to ask, how does one convict a dream?

Tell us about the Wintervolk. What are they?

JF: I figured that the Hibernatory world, the long and dark winter, would have a mythological world of its own, created over many years of hibernation - stories to explain mundane occurrences, stories to frighten children into their beds, stories for social compliance, and just plain weird stories. The most prominent in this story is the Gronk. This is from the ‘Manual of Winterology’, 24th edition:

1: Gronk: One of the more recent additions to the pantheon of WinterVolk, the only reports are from Sector 12 (Wales) in which the Gronk is said to ‘feed upon the shame of the unworthy’. Has an odd habit of folding linen, aggressive domesticity and a peculiar love of Rodgers and Hammerstein. Is said to live in the recesses of a host’s mind during the Summer, so might be considered parasitical in nature.
Panic Factor: 0 0 0. For More details see section 10.5.1

On your website, you state that you received 76 rejection letters from publishers before The Eyre Affair was accepted by Hodder & Stoughton. Comforting words for budding authors! If you had to give just one piece of advice to aspiring writers, what would it be?

JF: Take a longtermist approach. Most writers who have had any success wrote for ten years before they got published and might have written five or more unpublished books. It’s a skill like any other, and needs to be learned. You also need to write, write, and write some more. If you can go from the rejection of your third book to starting your fourth with no loss of enthusiasm, you’ve probably got what it takes.

Thank you so much for answering my questions. 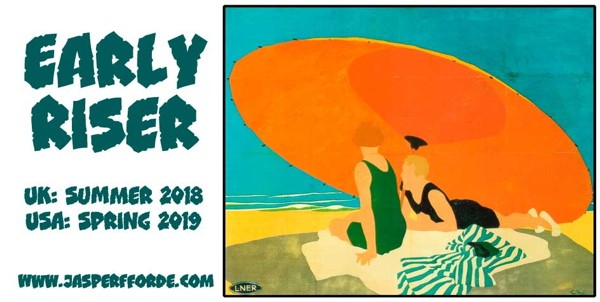