Agatha Award-winning author Daryl Wood Gerber writes the nationally bestselling Cookbook Nook Mysteries as well as the new Fairy Garden Mysteries. She also pens the French Bistro Mysteries, and as Avery Aames, the popular Cheese Shop Mysteries. In addition, Daryl writes the Aspen Adams novels of suspense as well as stand-alone suspense. Daryl loves to cook, fairy garden, and read, and she has a frisky Goldendoodle who keeps her in line!

Could you tell us briefly what A Sprinkling of Murder is about?

Daryl Wood Gerber: Since childhood, Courtney Kelly has loved fairies. After her mother died, she lost touch with that feeling of magic. A year ago, at age twenty-nine, she rediscovered it when she left her father’s landscaping business to spread her wings and start a fairy garden business in beautiful Carmel, California. But the light of the magical world she’s created inside her shop is darkened when she discovers the neighboring dog-grooming business owner dead beside the fountain. To make matters worse, the police suspect Courtney of the crime. To find the real killer, Courtney will have to wing it. But she’s about to get a little help from an unexpected new friend …

A Sprinkling of Murder is the first of the new Fairy Garden Mystery Series. You also write Cookbook Nook Mysteries, French Bistro Mysteries and Cheese Shop Mysteries. When writing a series how do you keep things fresh, for both your readers and yourself?

DWG: I make it a point to come up with a novel way to kill someone and add a new set of clues that will solve the crime. I focus on having my main character arcs grow, too. In addition, I really try to have fun when I write. Yes, even for my suspense novels. I want my readers to find something new and unique when they read. I want them to be entertained. 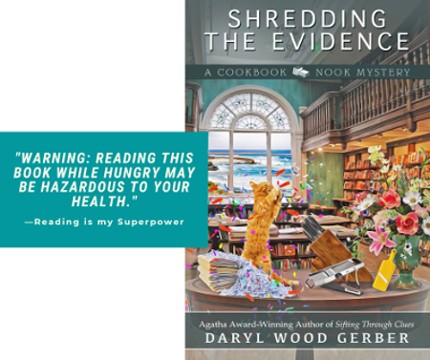 When plotting a crime, where do you get your inspiration?

DWG: I always start with the question, “What if?” Sometimes I take something from the newspaper, but most often, it’s, say, what if Courtney is throwing a fairy garden birthday party and the hostess dies? What if Jenna’s father’s friend’s buddy (following me on this?) is found dead and Jenna wonders if the buddy happened to be mistaken for her father’s friend? What if Mimi is throwing her first big party at her new bistro and her benefactor dies? I will attack this from every angle until the question seems to be the best one for the story. I am willing to be flexible. LOL

Why do you write mysteries?

DWG: I love to tell stories. I adore solving puzzles. So, I figure if I create a well-crafted puzzle for a reader, then they will derive the same pleasure that I experience when I read a good mystery. That’s my goal. As I said above, to entertain.

Books can transport readers to another world, another place or time. In real life, what’s your favourite place to visit and why?

DWG: I love Lake Tahoe. I spent almost all the summers of my youth there. It is one of the most beautiful places on earth. I drink in the scent of the pines and breathe easier when I’m there. I enjoy swimming in the icy waters. I love the cool nights, a glass of wine on the porch, and reading a book by the fire. It’s my little slice of heaven. My second favorite place is Carmel-by-the-Sea, where the Fairy Garden Mysteries are set. It’s quaint and charming and magical.

DWG: I do typical stuff to get started. I walk my goldendoodle, Sparky, exercise, eat breakfast, and do my crossword puzzle. Then I sit at my desk. I do a brief amount of email. (I try not to get sucked down the rabbit hole.) And then I might outline a new story. Do research. Or simply write a chapter or scene in my current work in progress. I write until lunch time and take a break. Then I return to my office (or wherever I’m feeling most creative – could be my kitchen or dining room) for another three hours, and if I accomplish what I want, I will do another amount of email or PR for my current book, and then I’ll walk Sparky a second time, pour a glass of wine, and retreat to the patio with a book to read for an hour. This is how it goes pretty much 5-6 days a week.

DWG: Don’t give up. Persevere. Believe you can. And find a good critique group. Getting good, unbiased criticism is vital to becoming a better writer.

Here’s a sneak peek at A Sprinkling of Murder…

“Do you see her? Is she down there?” I tried not to let my five-year-old customer hear the panic in my voice. Of course Fiona was down there. She wouldn’t have flown the coop. Okay, she was mad at me for telling her to make herself scarce, but honestly! “Look hard,” I said.

After a breathless moment, the curly-haired girl—Lauren—who was peering into a huge strawberry terra-cotta planter, popped upright, and spun in a circle. “Yes, I do, Miss Kelly. I see her.”

Once upon a time, when I was five, I’d danced among the flowers and twirled to my heart’s content, too.

“Call me Courtney,” I reminded her. Children who came into Open Your Imagination, my fairy garden and tea shop, didn’t have to be formal. The more familiar, the more fun. “And keep your voice soft. You don’t want to scare her.”

“She’s … she’s …” Lauren wiggled nervously as if I’d really put her on the spot.

I’d felt the same when I saw my first fairy. A week after my mother planted a fanciful garden filled with yarrow, lilac, and a host of herbs to attract butterflies, I met her. I had been dressed in something similar to what I was wearing now, denim overalls, a lacy shirt, and a gardening apron. She had been as pretty as the sunrise.

Lauren waved her arms. “She’s green and silver and blue and … and …”

“Go on,” I encouraged. I hadn’t wanted to trust my eyes, either, but my mother had told me to believe. Meadows, rivers, and mountains, she said, were alive with spiritual beings who would give a helping hand to those who asked nicely. I stroked the silver locket that held my mother’s portrait. She’d given me the locket that Christmas. An image of a fairy was etched into the lid. The word Believe was engraved on the underside.

She and I were standing on the slate patio, a roofed outdoor garden space,. Her mother was sitting at one of the many wrought-iron tables. She smiled indulgently and whisked her hand, encouraging her daughter to speak. Muted sunlight filtered through the skylight in the pyramid-shaped roof. The ornate fountain carved with fairies and gnomes burbled in the background. A number of customers browsed fairy figurines on the verdigris bakers’ racks and spoke in hushed tones. A few others chatted about how pretty they thought the twinkling lights were that we’d woven through the vines and the potted ficus trees. A cluster of women was checking out the miniature Pink Splash hypoestes plants and golden Monterey cypress we had in stock.

“Tell me about her wings,” I prompted.

I noticed a lot of activity inside the main showroom, the French doors and beveled casement windows of the L-shaped space providing a full view from where we stood. One woman was scrawling her name on the sign-up sheet for the upcoming tea. We didn’t serve tea every day, only on Saturdays. So far, the response for this week’s tea had been tremendous because we’d decided to pair it with a book club event. We were going to discuss The Secret, Book and Scone Society. Scones and tea … a perfect fit.

Lauren twirled in place, her tresses fanning out. “It’s silver and looks like my ballet dress.” She grabbed the seams of her pink tutu.

Lauren bobbed her head. “And she has blue hair and sparkly silver shoes, and she glows.”

“That’s Fiona,” I said. Her hair was actually gossamer and caught the light, much like a prism or the lens of a camera. At certain angles, her hair could become a variety of other colors.

Lauren stopped moving and splayed her arms. “Why are her wings so small? She can’t fly with those.”

“She’s able to fly but not long distances. She has to earn three sets of adult wings first, in addition to her current pair.”

“How will she earn them?”

Fiona, for all intents and purposes, was a fairy-in-training. She should have been a full-fledged fairy by now, but imp that she was, she’d done one too many pranks in fairy school, so the queen fairy had booted her out and subjected her to probation, during which time Fiona had to get serious. By helping a human, she could earn her way back into the ranks.

“Courtney, yoo-hoo.” Lauren touched my arm. “How will she do it?”

“By doing good deeds,” I replied.

“Everyone should do good deeds,” Lauren said matter-of-factly.

“Yes, they should.” And not pranks like putting syrup in my tea as Fiona had done earlier. I’d warned her that the queen fairy would frown on her antics. Months ago, when I’d pressed Fiona for details of her banishment, she had been vague. One major restriction was that she could not have fairy friends. Though more fairies existed in Carmel, she wasn’t to socialize with them. Yet.

“How did you meet her?” Lauren asked.

“She came to me the day after I opened this shop.”

After Fiona had told me about her predicament, I’d asked her if the queen fairy was a horrible, wicked fairy, and she’d blushed. No, she’d said. The queen was the most wonderful fairy in the whole world. When I grilled her for more information—like were other fairies on probation?—Fiona had dodged the question and instead educated me about her kind. In addition to types of fairies, like air fairies and water fairies, there were four classes of fairies: intuitive, righteous, guardian, and nurturer. Fiona was a righteous fairy, which meant she needed to bring resolution to embattled souls. Of course, there were rules in the fairy world. A righteous fairy couldn’t intentionally put herself in harm’s way.

At the tender age of ten, when my mother died, I had lost my ability to see them. No matter how hard I tried, no matter how much I rubbed the locket my mother had given me, I couldn’t see another. In the ensuing years, I grew serious. In high school, I studied hard to make my father proud. In college, I turned my attention to chemistry and earth sciences. After graduation, I joined my father’s thriving landscaping outfit in Carmel-by-the-Sea and dedicated myself to working the land: dig, plant, don’t have fun, repeat.

Until a year ago when Fiona appeared. At first I saw a sparkle and heard a tinkle and a ping. And then delightful laughter. She had flitted from behind a pot and introduced herself with a curtsy. When I found my wits, I asked why she would reveal herself to me. She explained that although the sorrow over the loss of my mother had squelched my ability as a girl to see fairies, it was my nose-to-the-grindstone attitude toward life that had continued to suppress me. When I made the decision at the ripe old age of twenty-nine to spread my wings and start a fairy garden business, voilà. My heart opened, and Fiona swooped in. She hoped she could save me so I could save her. 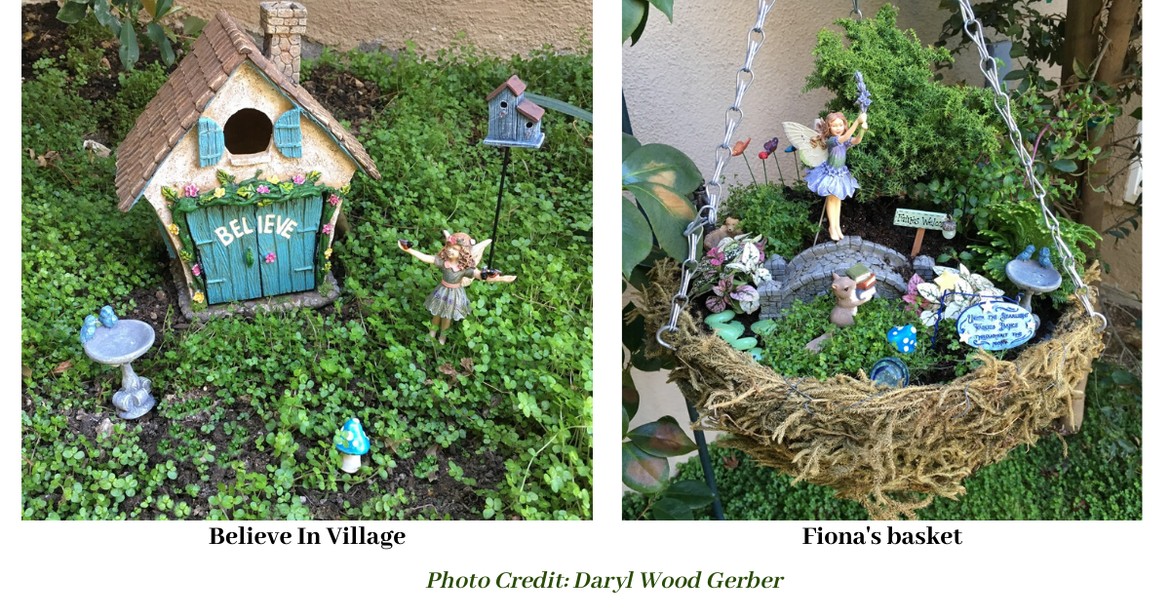